TA-DAH! DONE IT! At 15.07 on Thursday November 21st, 2019, I clicked “Publish” on the Kindle Direct Publishing site and at that exact moment, finally became a Self Published Author!

Although the site tells you that it can take up to 72 hours for the book to show up on the Amazon site, I got an email at 19.53 saying that it was “live and available” from the Kindle Store. So a little under five hours from first ever publish to potential first purchase. BOOM!

And here’s the thing – I didn’t publish the book I intended to!

Yes, I know the plan was to SP The Fan Film Book, but with all the recent kerfuffle in the UK over Brexit, I kept being reminded of something I had written years earlier. Thinking about that prompted the idea that maybe now would be a good time to do an update and release that as an Ebook instead.

The Fan Film Book is a bit of a passion project for me and it’s really important I don’t rush it and get it right. Yes it’s all there and pretty much ready to go, despite the need to finish edit-checking the grammar etc but, the idea of going through what I’ve just been through with that book would have sent my stress levels stratospheric.

Much better to get your feet wet in KDP with something that, while still a valid piece of work that I’ve put a lot of time and effort into, isn’t as meaningful, if you know what I mean, to me personally.

So whether it sells or not isn’t as important as it being the first one “over the top”, the “test run” if you like for how you get to grips with all the various things self-publishing requires you to do. 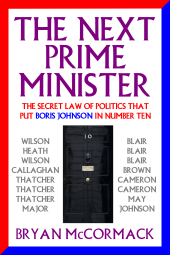 And so my first self-published work ended up being The Next Prime Minister, an updated expansion of something I initially wrote as part of Sell Your Self! back in 2009.

I’ve added a page for the new book to the site, which will remain an Ebook only, for now at least.

And it’s a minimal investment in me as an author, dear reader, with never before revealed political insights for just 99p if you’re a Brit and $1.28 if you’re not. Bargain!

For all the stress & hassle and re-working & repetition, it’s been hugely rewarding to see the finished article up on Amazon. To be able to look at it and say “I did that! And I did it all by myself, too!”

Mind you, compared to what comes next, that was the easy part.

Next comes the really tricky bit, all that marketing & promotion malarkey…