I don’t know about you, but for me it’s been another frustrating week in Authorville!

It might not be a recognised medical condition yet, but I’m pretty confident that one day in the future Frustrated Author Syndrome will be a thing. It’s a debilitating condition caused by consecutive and sometimes consequential problems that the patient suffers from as a result of insufficiently clear guidance and a lack of experience.

This week I’ve had both to deal with. And the source of all this bother? Trying to format and upload the cover for the planned Paperback Edition of The Fan Film Book. The cover design and the blurb were finalised months ago, when self-publishing was still an aspiration rather than a reality. All I had to do was format them for print…

Hint: When you can’t see the solution to your problem, you either need to get some Fresh Eyes on it or Refresh Your Own Eyes.

The first decision you have to make when adding a Paperback version alongside your existing Ebook in Kindle Direct Publishing is what size to make it. Since my previous book Sell Your Self! was 5 by 8 it made sense to make The Fan Film Book the same size since they’re eventually going to sit side by side on my bookshelf.

Having filled in all the information boxes KDP require from you for the paperback, the next step is to choose not only the size of the book but what sort of paper you want it printed on.

White paper or Cream paper? Cream? Okie dokie. And what sort of cover? Matt or Glossy? Having handled some self-published books with a KDP Matt Cover [yuk!], I went for Glossy.

Next problem to solve was the cover. And what a problem that was to solve. The solution, as almost always in life, was staring me in the face the whole time…

Having selected the size of your Paperback, which in my case was 5 by 8, you download the correct sized KDP template and fit your cover design to it. Or, if you’re me, you download the wrong sized template by mistake and waste several hours resizing it and uploading it, repeatedly getting the same Error Messages, before you finally realise what you’ve done.

Then you waste more time trying to cut your losses by using one of the existing KDP Cover Templates, only to realise that none of them are really what you want for your book and result in a cover that’s nowhere near as good as the one you’ve already done yourself. And so, having wasted some more time, you end up back where you started…

Part of the problem was that my existing cover design file was that little bit too big for the print template I eventually chose. Instead of 3210 wide by 2475 high, I’d overcompensated and gone with 3930 wide by  2774 high…. 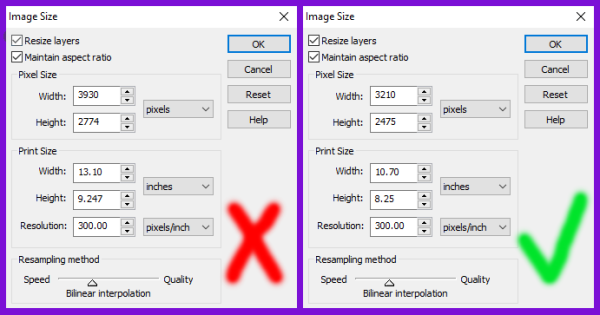 Which, to be fair, is better than the design being smaller than it needs to be, resulting in upscaled images that would end up blurry when printed. But in order to get everything to conform to the template I had to resize the three completed individual elements of the final cover…

Those three elements are the Front Cover [Top Quote, Title, Images, Subheading, Author Name], the Spine [Book Title, Author Name, Logo] and the Back Cover [Heading, Subheading, Blurb, Logo], after all of which you end up with THIS:

The above image is the same cover as the previous one, only with the KDP Template showing through so you can see how the three individual elements of the cover – Front, Spine & Back – fit within the trim borders. But when I uploaded it, every time I uploaded it, it kept coming out wrong.

So where was I going wrong?

Hint: When you can’t solve your problem, look at it as a set of steps. Look at each one in turn to find the one step that you’re getting wrong that’s causing the problem you can’t solve.

The reason why the uploaded cover kept coming out wrong wasn’t that the design was wrong. The design was fine, I just wasn’t exporting it properly. Since KDP requires a PDF for your cover, you can export your image file as a PDF in one of two ways.

You can either click Publish as PDF or click Print and then select Microsoft Print To PDF. I tried both and neither of them worked. But that was only because I kept making the same mistake:

When you export the image as a PDF, do NOT click either of the Fit To Page options. That’s what I had been repeatedly doing, thinking it would ensure the image was the right size. It doesn’t, it messes it up completely. Change that one thing, that one step in the problem-creating process, and it was problem solved!

And it only took me a week to figure out where I’d been going wrong!