FOR YOUR FAN FILM?”

Making a fan film is already enough of an adventure without someone offering you a Dalek just when you think you’re finished! With seven episodes filmed and only the scenes set inside the TARDIS to finish off, actor and author Bryan McCormack must find a way to defeat…

A FAN FILM ADVENTURE IN SPACE AND TIME!

The Making Of Doctor Who – Project: Fifty.

Starring Bryan McCormack as the Doctor.

And Eilidh Weir as Becky.

The Making Of Doctor Who – Project: Fifty tells the story of how a small team of students (and staff) from the University of the West of Scotland’s Ayr Campus made a fan film to help celebrate the Fiftieth Anniversary of BBCtv’s Doctor Who in 2013.

NEIL PERRYMAN – Adventures With The Wife In Space

THE DALEK FAN FILM INVASION! concludes the story of the making of Project: Fifty, a story that began in A FAN FILM ADVENTURE IN SPACE AND TIME! and gives you insider access to all the behind the scenes drama and production history of the final five episodes of DOCTOR WHO – PROJECT: FIFTY. 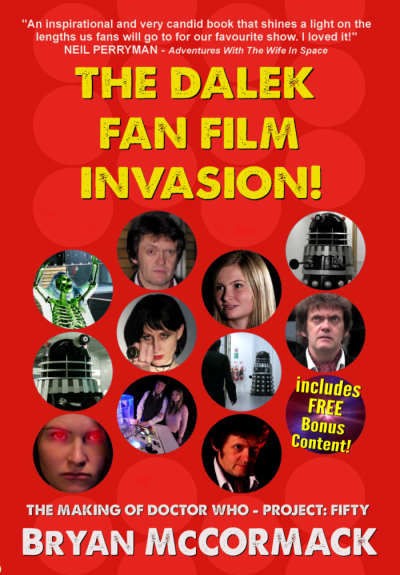 Learn how the fan film was created, developed and shot in the face of multiple challenges on both sides of the camera that threatened to derail it and leave it unfinished. And how they were [eventually] overcome. Even when someone unexpectedly threw a Dalek into the mix!

Discover the success secrets to making your own fan film as Bryan shares his insights & experiences and the lessons he learned as Writer, Producer, Director, Editor and Lead Actor!

Giving you access to Exclusive Bonus Content that includes the Shooting Scripts and more, THE DALEK FAN FILM INVASION! and A FAN FILM ADVENTURE IN SPACE AND TIME! will be your indispensable Fan Film Survival Guide.

A FAN FILM ADVENTURE IN SPACE AND TIME!

The Making Of Doctor Who – Project: Fifty.

Starring Bryan McCormack as The Doctor.

Go to our VIDEOS page to watch all 12 Webisodes!