As someone who never struggled that much at school, except for Maths (which I sucked at, big style), I always intended, and expected, to go to University. And I did. It just took me a lot longer than I thought it would to get there… about another thirty years!

After your O Levels, in early 1980’s Scotland you went on to do your Highers, the equivalent of A Levels in England. You did them in your Fifth Year at school, and you needed as many A and B grades as possible to outdo the competition and have a shot at being offered a place. My Fifth Year, 1982 to 1983, was disrupted by the family moving around so much that I was at three different schools – Prestwick Academy, Inverness Royal Academy and Greenfaulds High School in Cumbernauld – in the space of just six months.

So 1984 wasn’t, as I’d thought it would be, the year I went to Uni. Instead I was busy chasing my dream of being an actor. I wouldn’t get to University until 2012, which, if nothing else, just goes to show that it’s never too late!

Hint: Never give up on your dream just because it doesn’t happen when you want it to.

So, having finally got there, albeit a lot later in life than I thought I would, what did I learn?

Having just spent the previous two years at College, and dealing with the challenge of having to do essays again for the first time in nearly thirty years, the first thing you learn is that the leap from College to University is a huge one. Nothing at College really prepares you for the step-change you experience at Uni when it comes to upping your essay-writing game.

Hint:  Get ahead of the curve. The earlier you start work on your submissions, the easier they will be.

And if the change from College to Uni is a big one, it’s nothing compared to going from Undergraduate to Postgraduate!

Make the most of your time at Uni, you’ll never experience anything like it ever again. Take every opportunity that comes your way to express yourself. It’s just as much about discovering who you are as a person as it is about learning the subject you’re studying.

Hint: You never know who among your classmates could be the key to your future employment or happiness. Or maybe even both!

When I went to Uni, I had a view of myself that came under some intense scrutiny. I was forced to re-evaluate not only who I thought I was but who I thought I could be and why was I the way I was?

When I started back at Full Time Education, my view of myself was that I was an Actor. That was it. Acting & performing was something I had a natural talent for and it was all I really wanted to do. And then… 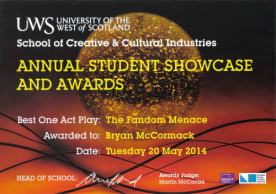 As part of my Undergrad course at UWS, there were two modules that stimulated a change of thought. The first was Team Writing For Television, the other was The One Act Play.

The first taught me that I don’t really work that well, creatively, as part of a team. I much prefer to fly solo. The second taught me that writing was something that I had more talent for than I thought, resulting in me being awarded Best One Act Play 2014 for The Fandom Menace.

The main thing I learned from both was that I had to revise my opinion of myself. I wasn’t just an Actor, I was An Actor Who Could Write. I put both of those skills to use when I created my Dr Who fan film, Project: Fifty. But that process of self evaluation and re-evaluation wasn’t over. It had only just begun…

Hint: Sometimes in life, it’s only by being on the “wrong” path that you can get on the right path.