Writing books isn’t easy. As an author, you know this as well as I do. But what if there was a way to make writing that book of yours easier? That’s what you’re always on the lookout for, right? I certainly am, and I reckon I’ve found it…

Don’t Write It, Speak It.

We want to find a way to write more books faster, and write better books quicker. That’s why writers buy so many How To Write books. We’re looking for Tips &Tricks that will help us manage our time better so we can write more, keep track of our ideas [Hint: use a My Great Ideas! creativity journal] and get the words out of our brains and onto the page more efficiently and elegantly.

So why do we continue to write using the slowest possible writing method available to us?

I’m talking about writing. Writing is a really slow way to write a book or a novel.

Writing longhand, with a pen, in a notebook, was the only way to write before the invention of the typewriter. Which is not only Slowsville, Arizona its also dependent on having handwriting that your editor/publisher/printer can actually read.

Writing longhand on a typewriter, bashing away at those prone-to-jam-keys, was faster than writing by hand but all that fiddling about with printer ribbons was a pain. Even when they upgraded the Typewriter to the Electric Typewriter, it was still a pain. I know, I had one.

After decades of being Top Dog in the Get It Onto The Page stakes, the typewriter was soon overtaken by writing on a keyboard at a PC or a Mac or a Laptop. Which is how most writers these days do their writing. Me included. It’s where I’m writing these blogposts and my books.

And it’s way too slow. Consider this:

You can think faster than you can talk and

you can talk faster than you can type.

Typing is the slowest of the three.

Writing By Typing is the slowest way to write a book.

Writing By Speaking is the fastest way to write a book.

So don’t Write your book, Speak your book. Dictate it.

To show you what I mean, and how much more productive Writing By Speaking can be than Writing By Typing, here’s a real-life example:

When I wrote A Fan Film Adventure In Space And Time!, aka The Fan Film Book, I did it the old-fashioned way, typing the words on my PC keyboard onto the screen in front of me. The book was written up from the Production Journal I kept throughout filming, and once I’d deciphered my handwriting [!] and remembered the events in question, I wrote it up and expanded on the original notes.

So when it comes to writing the SPOILERS! sequel, aka The Other Fan Film Book, I knew I didn’t want to have to go through all that again. So I didn’t. Instead, I used a piece of software called Temi and spoke it instead of writing it.

Before I show you how it works, what I did with it and why you should consider using it, let’s go over the numbers…

The Average Speaking Speed is round about 160 Words Per Minute. Which means if you sit down and talk for an hour you can get 9,600 words out of your head and onto the page.

The Average Typing Speed is round about 40 Words Per Minute. So if you sit down and write for an hour straight you can get 2,400 words out of your head and onto the page. Which is still pretty productive, but a total Tortoise compared to the Hare in your head.

Now before I go any further, I need to tell you that I am NOT being paid by Temi to say how good it is. This is simply me telling you why it works for me and why it may very well work for you too. So…

Temi is Speech To Text transcription software. You can get it on the Web for your PC or Mac or you can download the Temi App to your phone.

Which means that you have the option of either recording with a microphone at your PC, talking from your notes, which of course you have in front of you, or simply using the app on your phone to record yourself speaking. Best of all, you get the first 45 minutes free of charge. Gratis. For nothing.

So you record yourself talking, upload the file to the Temi website, tick all the little tick boxes to say that your audio isn’t rubbish quality, enter your email, and a few minutes later, 3m later in my case, you get a link in an email to view the text of your audio file.

You can listen to the audio file as you read the text converted from it and edit right in the web page.  As the audio plays, the corresponding text is highlighted in time with the audio. This means you can follow along, if you want to, and check to see if there are any misunderstood words that Temi has got wrong. You can edit it and then download it.

If you’re one of those people who don’t like the sound of their own voice you can ignore the audio and simply edit the text file in Temi or download it straight to your computer, put it in Scrivener or Word or whatever your preferred choice might be, and edit it there. 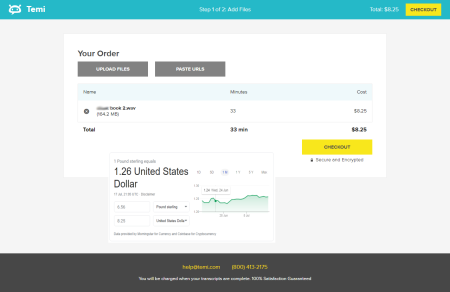 So I recorded myself speaking from the notes in my Fan Film Production Journal from the point where I knew Book Two would be starting, which was when I was offer the use of a SPOILER! for the fan film.

It’s important that the Freebie File you first upload is under the forty-five minute mark. Mine was a few seconds over and Temi rejected it. Having cut out a few seconds of pauses to get it under the maximum length, at 44m 45s, I uploaded it no problem. I then recorded another 33m of audio, which took me to the end of the Production Journal and the completion of the fan film. Which is the end of the second book.

So recording the basic text of The Second Fan Film Book, detailing everything that happened, though not in detail, took me a grand total of one hour and fifteen minutes and cost me a total of $8.25, which is £6.56 in real money. 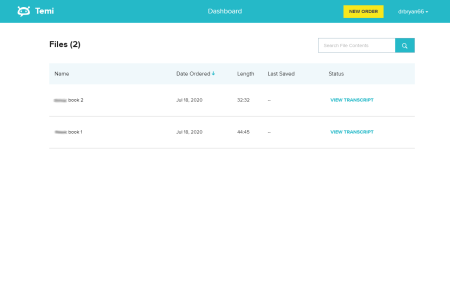 Getting to the finished First Draft for The First Fan Film Book took a lot longer than an hour and a half! It took me about a month to get that First Draft out of my head and onto the page the old fashioned way. So let me say it again: Writing By Typing is too slow. Why keep doing it when there’s a quicker way?

So I’ve saved myself at least a month’s work, probably more, by speaking the book instead of trying to write it between shuttling back and forth to the DDJ and doing all that Life stuff people have to do on their days off.

So. An hour and a half or a month?

Which would you choose? Me, I’ll go with an hour and a half!

And yes, I know you still have to edit the text of the recording, but if you’d written it by typing it you’d have to do that anyway. What you’ve gained is time. Speaking & Editing is, hands down, more productive than Typing & Editing

By Speaking your book instead of Writing it, or at least speaking as much of it as you’ve got, you’re saving yourself a huge amount of time, potentially shaving weeks if not months off how long it would normally take you to finish your book.

Which means you could, potentially, write two books in the time it used to take you to write one, maybe more.

I don’t know about you, but speaking for me, I think I’ve just written my last book. From now on, I’ll speak them!

You can find Temi, and try it for yourself, HERE.